33-year-old Rael Mukiri, a mother of 4, is one of the many beneficiaries of the USAID sponsored REGAL-IR programme in Isiolo County, Kenya. As part of this programme co2balance are introducing our fuel-efficient ‘bucket’ stoves which have been designed to be produced and sold by artisans in the project area. The stoves reduce fuel consumption by 50% helping to slow deforestation as well as reducing respiratory infections caused by smokey kitchen environments. They also provide an invaluable source of income for the communities that make them.

Rael was delighted to share with us her experience of being part of the Isiolo trial: “As women we are very grateful to co2balance because we are jobless. 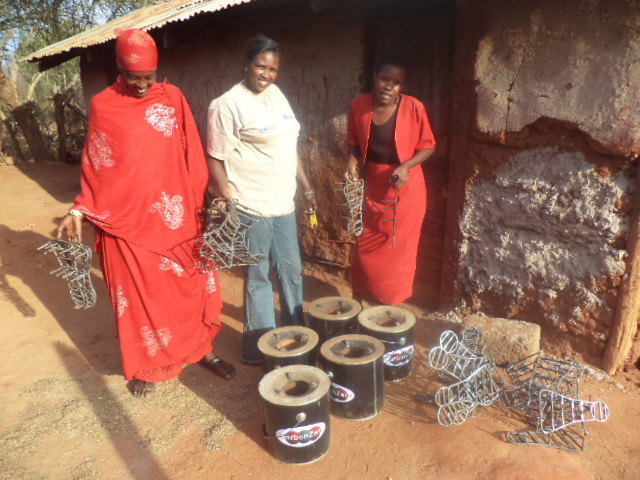 She goes onto explain that to meet their fuel needs they have had to depend on unsustainable harvesting of trees which is greatly affecting the local environment and driving competition for the remaining wood resources. But since the project started, she says their lives have changed for the better: “For a long time, we have been recipients of handouts, which we use quickly and then we are back to the poverty we had. We have received education from you and we can now say we are enlightened. They have really lifted us up and our lives have really changed, we now believe in ourselves and we are hopeful that the future is bright”

Rael says that most of their time would be spent looking for firewood; sometimes three to five days in a week: “We used to go out to the forest to look for firewood, but now we have been taught how to take care of the environment. The forest is not a safe place for women especially because sometimes we would get snake bites or even get attacked.”

She continues on to explain that it’s not just women that are seeing the benefits of this project, “Our children can now get time to study and get an education instead of following us to the forest to look for the firewood”

As the REGAL-IR programme enters its second year we are looking forward to scaling up our activities and helping more people like Rael in Northern Kenya.