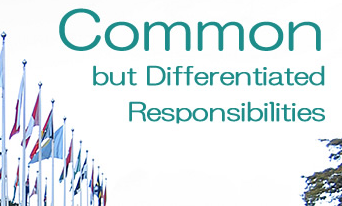 “In view of the different contributions to global environmental degradation, States have common but differentiated responsibilities”. [Principle 7 of the Rio Declaration at the first Rio Earth Summit in 1992]

A majority of us will be familiar with the Conference of the Parties (COP) international climate change talks that take place every year (i.e. Copenhagen, Durban, Doha, Warsaw, and Paris in 2015). Not widely known is arguably the most important COP decision ever came at COP 1 in Berlin in 1995. It was called the Berlin Mandate. It resulted in the principle of Common but Differentiated Responsibility (CBDR) being cemented into the UNFCCC framework. CBDR directs developed countries to the lead in process of mitigating climate change. Under CBDR, Annex I (Developed) countries that have cumulatively produced (and benefited from) emissions that created climate change, bear a disproportionate burden to solve the problem. The resistance of some developed nations (chiefly the US, Canada, Russia, Australia) to any deal that does not break from current CBDR status (i.e. including emission reduction commitments from non-Annex 1 countries) is perhaps the main roadblock for a successful international climate change legal framework going forward.

In the run up to 2014 COP in Peru and more importantly Paris 2015, it is important to investigate whether the concept of CBDR is still an equitable way of dividing the countries of the world around climate change commitments especially focusing on limiting average warming to 2°C or the carbon budget that gives us a “coin flip” chance of achieving this legally binding target (agreed in Copenhagen Accord 2009, and Camp David Declaration 2012). So how important is the concept of historical responsibility? While also being across nations, could a division of CBDR be based within nations, or across national populations? Can CBDR help us to understand who the high carbon emitters are?

First off, we must never forget the notion of historical responsibility, i.e. developed nation’s historical contribution of emissions. Historic data shows that developed nations have emitted approximately 75% of cumulative emissions in the atmosphere since the industrial revolution. Furthermore, if developed nations ceased emitting entirely this year (which is impossible) they will still have emitted more than half of cumulative global emissions in the context of the “coinflip” carbon budget that keeps us below 2°C warming by 2050. Let’s ask:

Who are the high emitters? Applying Pareto’s 80:20 Rule

[The following analysis is broadly based on work led by Kevin Anderson from the UK Tyndall Climate Change Centre].

There are 7.125 billion in the planet in 2014 (UN, 2014). The interesting question is how many of these 7.125 billion people would need to make substantial changes to their lifestyles and level of greenhouse gas emissions in order to avoid warming greater than 2°C? It is interesting now to consider Pareto’s 80:20 rule. This rule states that 80% of something relates to 20% of those involved. This is a surprisingly useful and robust rule of thumb. In the context of climate change this would mean that 80% of emissions (40 Billion tonnes CO2e per annum) derives from 20% of world population (1.425 billion people). As well as across nations (for instance Developed vs Developing) Pareto’s 80:20 rule also holds within nations (wealthy vs poorer people).

Overall the Tyndall Research Centre have found that 40-60% of world emissions comes from approximately 5% cent of the world population. Admittedly, this is very rough calculus; but it provides a broad and practical guideline. Resulting from this analysis we understand that the bulk of carbon emissions come from a small percentage of the world’s 7 billion people. This most likely comes as no surprise to you. Yet, in the West (Europe, North America) one often hears statements such as ‘Oh yes, but the Chinese are becoming rich, everyone wants a fridge and a car…’. It is true that people want (and moreover deserve) these things. There are however two major misconceptions about common but differentiated responsibility and Chinese development in the context of climate change.

Firstly, carbon consumption not carbon production is a measure of a person/countries carbon footprint. The table below of Global Carbon Project’s 2014 consumption-based statistics

Annual emissions in tonnes of CO2 per person

This analysis highlights that carbon emissions from an average Chinese person’s lifestyle are only 18% higher than the global average, are 36% lower per capita than those of a typical European and just a third of the emissions from a US citizen. The lifestyles of UK, German and Japanese citizens emit, respectively, 110%, 90% and 70% more carbon than do their Chinese counterparts. Even with widespread low carbon nuclear energy, French emissions per capita are still over 35% higher than those of an average Chinese person.

Secondly, by the time the mode person (not the mean) – mode being the ‘normal’ person in China, has obtained a car or a fridge, a dramatically overhauled low-carbon energy system would already have to be in place in order to limit global temperature rise to below 2°C. It will take China 20 or 30 years, even at 10% annual growth rates (2013 GDP growth rate was 7.6%), to get its mode population to that level. Essentially this means that the poor cannot move fast enough to affect the basics of the maths for 2°C warming.

It seems logical then to ask; Are we the wealthy ‘few per cent’ – principally, the developed countries of the world sufficiently concerned to pass the necessary legislation and make substantial personal sacrifices and changes to our lifestyles now in order to safeguard the planet for the rest of the population and future generations? Since we know who needs to change, could policies be aimed specifically at the “few per cent” that are currently emitting significantly and disproportionately as part of an equitable international climate change regime? This requires vast political mobilization and an unprecedented step change on the scale of which we have not seen historically but could it also offer policy makers hope in realising actual emissions reductions, something they have consistently not delivered.

Overall, if the global community is serious, in its repeated commitment to ‘stay below a 2°C temperature rise’, the mitigation challenge for all nations will be extremely demanding. Mitigation needs to be delivered first in the US, the EU and other wealthier nations whose citizens typically live higher-carbon lifestyles, with China, India and other parts of the developing world only following suit much later. We cannot abandon the concept of Common but Differentiated Responsibility however tempting and politically palatable it may seem.

One thought on “Climate Change and Equity: Understanding Common but Differentiated Responsibility (CBDR)”