Kereita forest forms the Southern part of greater Aberdare Range. The forest covers a total area of 4,722 hectares, with 80% being indigenous forest, 16% of exotic forest plantation mainly cypress and 4% grassland. Valleys and ridges are some of the characteristics that best describe the forest. This is a very serene and pristine area and is a designated birding site. It is very serene and pristine.

Kenya Forest service (KFS) is actively involved in forest management and conservation. It regulates forest resource use such as exotic tree management, grazing in the forest and wood collection.

For the last four years Carbon Zero has been implementing an improved cook stove project in this area with about 8,000 energy efficient cook stoves distributed to the local community members. Carbon Zero  is proud for being part of the greater initiatives to conserve the forest and save it from anthropogenic activities i.e. deforestation for wood fuel. The project has led to immense reduction in greenhouse gas (GHG) emissions and indoor air pollution in the project area and in Kenya as a whole considering that the majority of Kenya’s population (68%) is dependent on biomass as their primary source of energy for cooking.

Yesterday Carbon Zero team was delighted to host the Managing Director; Mark Simpson from UK in the project area doing random visits to check on the project beneficiaries. It was a nice experience meeting Carbon Zero cook stove beneficiaries and listening to them share their testimonies regarding the stove. All the visited beneficiaries were glad and praised the stove especially on its high level of efficiency and fuel consumption. Many indicated that Carbon Zero stoves use less wood thus loggers have less demand so less trees are being cut down. And over time this has increased vegetation cover in Kereita forest which was previously threatened by loggers for firewood as the demand of wood fuel remained high since people were using three stone open fires that consume more wood.

Some families indicated that typical stoves (three stone cook stoves) release clouds of toxic smoke into the home as there is no ‘chimney’ or exhaust tube something that Carbon Zero stoves have been of great help as they have drastically reduced particulates, which means that the families using them have better health. 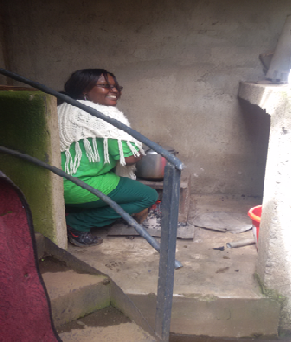 As Carbon Zero the use of improved cook stoves has been on our top agenda in the campaign to reduce pressure on the existing natural forests. We pride contributing in saving one of Kenya’s natural water towers (the Aberdare Ranges) through 8000 energy efficient cook stoves distributed to the local community in the project area. For the past four years there is a traceable impact chain in wood harvest trends in this region. The use of Carbon Zero Stoves has greatly contributed to reduced wood harvest intervals therefore giving Kereita forest vegetation a chance to flourish. In addition economic and social benefits are realized as wood expenses are considerably reduced, not forgetting other risks that come with wood collecting like rape and violence on women and young girls.