In a continued drive to expand access to water in Northern Uganda, CO2balance recently repaired a solar powered borehole in Omoro sub-county that had been broken down for over 10 years. This borehole broke down at the peak of the insurgency caused by the Lord’s Resistance Army rebels in Northern Uganda. This solar pump was estimated to be serving over 2,500 people at the time of its breakdown which caused a major water crisis in the sub-region.

A solar-powered pump runs on electricity generated by photo-voltaic panels or the radiated thermal energy available from collected sunlight as opposed to grid electricity or diesel-run water pumps. A submersible pump is used and this pushes water to the surface by converting rotary energy into kinetic energy then into pressure. Solar pumps are an energy efficient, environmentally friendly way to pump water for various uses from domestic consumption to supporting agriculture activities.

The community at Omoro sub-county have been heavily relying on unsafe water sources as a result of the high population putting great pressure on a limited supply of boreholes which have not been well maintained and have therefore broken down. They further suffered a big water crisis early this year as a result of drought in the region. A growing population, including families moving in from neighboring districts, has heightened the pressure on water resources in the area.

With this new safe water source, access to clean safe water has been increased and many households will benefit from it. The solar powered pump scheme has storage pump tanks of up to 32,000 litres of water, feeding 5 distribution points which will ensure constant supply of water to the people of Omoro. The pioneering technology will ensure that water from a single borehole reaches 5 distribution points throughout Omoro, limiting the distance that users have to travel to access safe water.

This is the first time that we at CO2balance have incorporated a solar borehole into our project activities, having always previously focused on hand-powered boreholes. We are very excited at the potential of introducing a technology that, using the power of the sun, will extend clean, safe water to 5 times as many individuals as would be possible with a hand pump. Watch this space for updates on this project and we hope to repair many more solar boreholes in years to come! 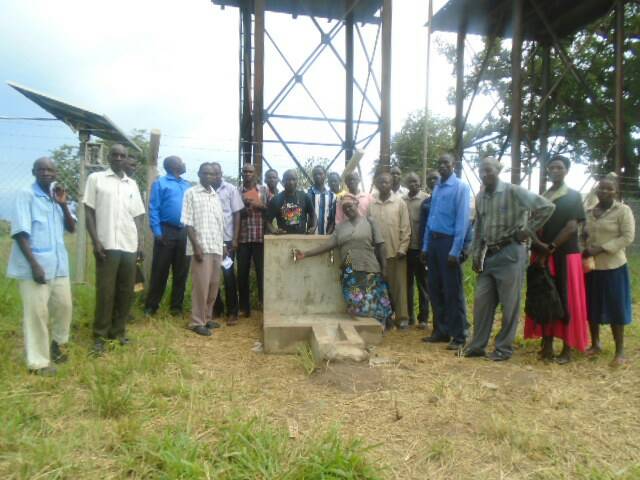