Here is some analysis (though not an exhaustive list) of the “carbon bubble” and of why it is so difficult to curb fossil fuel use in our 21st century world economy. For reference, 81% or 12,150 Mtoe (million tonnes of oil equivalent) of world primary energy demand was met by fossil fuels in 2013, with this figure predicted to stay above 80% as far ahead as 2035, primarily driven by increasing demand in the BRIC economies, particularly India and China (IEA, 2013).  The diagram below and four numbers produced by Bill Mckibben and Carbon Tracker in 2010 can go a long way towards explaining the “carbon bubble” and its impact on curbing fossil fuel use: 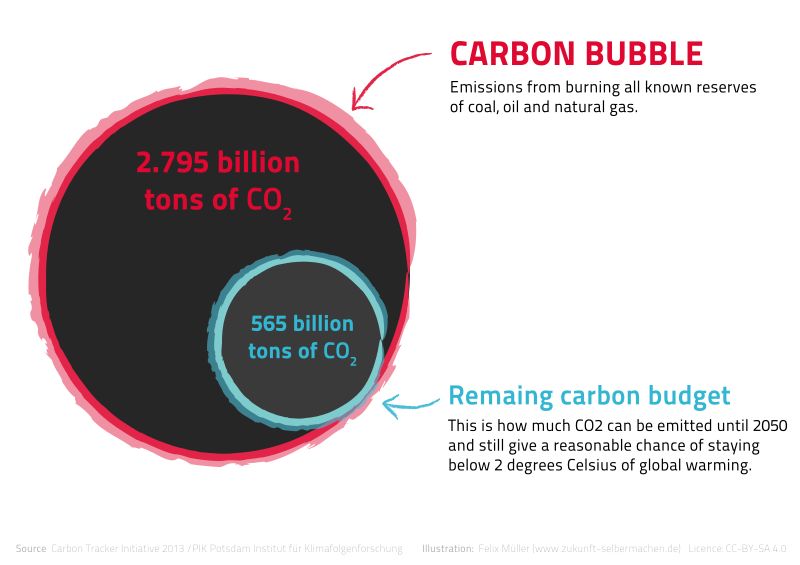 167 countries responsible for 90% of global carbon emissions have signed the Copenhagen Accord (2009), which states 2°C warming as an international legally binding target for curtailing climate change. Any worldwide average global temperature rise above this target has been deemed as “dangerous”. Moreover given the grave situation we have (knowingly) got ourselves into, we need to be honest and clear as to the implications of 2°C warming. The repercussions of 2°C warming reach deeper than we tend to imagine. 2°C is a death sentence for many of tomorrow’s most vulnerable communities. Again for reference it is important to remember that all the data on our current warming trajectory is perfectly in line with temperature rises in the region of 4-6°C. It is fair to say, based on many (and ongoing) discussions in the climate change discourse that there is a widespread view that a 4-6°C future is incompatible with any reasonable characterisation of an organised, equitable and civilised global community.

An estimate of the amount of CO2e humans can emit from fossil fuels into the atmosphere by 2050 in order to have a 50:50 chance of staying below the 2°C target. This has also been termed the “coin-flip” scenario.

This figure represents anthropogenic carbon emissions from fossil fuel use in 2013. At this rate the 40 year carbon budget would be used up in less than 15-20 years.

This number describes the amount of carbon already on the books of the world’s fossil fuel companies, or the proven fossil fuel reserves. This does not include $674billion invested in 2013 to find and develop new potentially stranded assets e.g. offshore Brazil, Artic, Venezuela and UK unconventional gas. Doing the math there are 5 times as much fossil fuel reserves as is internationally recognised as safe to burn. This has been coined the “carbon bubble”. Although the reserves are still technically in the ground, economically they are already aboveground. Reserves are embedded in share prices, companies are borrowing money against them, and nations are basing their budgets on expected returns of their reserves. Altogether fossil fuel reserves are worth $72 trillion. This is approximately in line with worldwide GDP of $74 trillion in 2013. Essentially this means that fossil fuel reserves equal to the value of all economic activity in the entire globe in an entire year will have to be written off in order to avoid 2°C warming. Clearly this will become a contentious issue.  How will investors be compensated for their stranded assets? The short answer is nobody knows. The long answer is also nobody knows. Some investors may thrive but there are likely to be more losers than winners.

The numbers aren’t exact of course, but the carbon bubble makes the housing bubble and subsequent crash in 2008 look insignificant by comparison. It also may not necessarily burst. All fossil fuels may yet be burned in which case investors will do fine, assuming they write letters of apology to their grandchildren. All in all there is a clear future incompatibility between healthy fossil fuel balance sheets and a healthy planet.