The 2004 Nobel Peace Prize went to the Kenyan environmentalist, Wangari Maathai (may her soul rest in peace), best known for organizing a grassroots movement in which thousands of people were mobilized over the years to plant 30 million trees in Kenya and elsewhere and to protest forest clearance for luxury development. Imprisoned as an opponent of the former president Moi, Maathai linked deforestation with the plight of rural women, who are forced to spend untold hours in search of scarce firewood. Deforestation practices are turning large areas of the planet into deserts. The earth is quickly eroding and warming up and the natural balance is being seriously disrupted, with water scarcity, failed crops, hunger, poverty, migration, natural disasters and climate changes as a result.

Availability of both service and productive functions to communities who depend on forest resources in Meru South region has been decreasing annually due to increased number of human activities. The activities have mainly been exploitation of timber and firewood. A research on human activities influencing deforestation on Meru Catchment Forest Reserve carried out by researchers from the Forestry Training Institute of Tanzania show that the main human activities disturbing the forest are firewood collection for commercial and family use (21 per cent), and illegal lumbering etc. The research recommends that awareness and capacity building on participatory forest management to communities adjacent to the forest could have social and economic incentives for conserving forest resources.

The Meru South Improved Cook stove Project is a project is fully sponsored by Co2balance and was started in 2011. It is located in the Meru South District of Tharaka Nithi County a place famously known as Chuka. Co2balance team with full participation of local area leaders saw the dissemination of 8000 ICS in the area.

The area is adjacent to one of the five water towers in the country; a tourist attraction site due to its heritage and environmental importance. More than 90% of rural families in Meru south use wood fuel to cook. The cost of wood fuel has escalated due to deforestation. Consequently, the families spend a big percentage of their income purchasing wood fuel. Besides the high expenses in wood fuel, another problem of cooking over open fire is the increased health problems brought by smoke such as lung and eye ailments.

From a distance as you approach Ntumara Village in Chuka, clear lands are observed, which an indication that there are few trees near the bordering forest. The locals explain that many trees were brought down for firewood while using the three stone stoves. Due to the high demand of wood product, the locals were strained to cut down immature trees for firewood. Firewood has become a rare commodity in the area. The few trees in the farms are exotic e.g. silk oak (grevillea robusta) and tomato tree (Solanum lycopersicum) which serve as fodder and tomato tree produce fruit among other exotic trees. Indigenous trees are also very rare in this village.

The objective of Co2balance ICS project is to reduce the pressure placed on local forests by reducing the amount of firewood fuel consumed during cooking. Additionally, the money a family spends on wood is reduced considerably. This translates into money being available to be spent on food, education and medical care. Education on optimal stove usage is provided by the Co2balance team. Beneficiaries’ education is conducted to individuals, women groups and in local chief’s barazas and covers from lighting, effective wood loading for optimal stove usage. 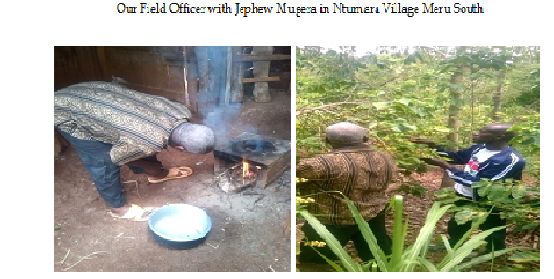 Jephew Mugera, Ntumara Village elder recently demonstrated to Co2balance team, how to light the stove. In absence of his wife; he explained how he lights the fire without difficulties. In his own words he says, “Hii jiko hata mama anaweza enda biashara zake na niachwe nikijishughulikia kwa haraka.”
He explains in Swahili which means (with this stove, my wife can attend to other business as I am able to light it fast without difficulties.)

He also adds that it is easy to use the stove as he requires less firewood compared to the three stone jiko. He compares the three 3-stone stove with a giant which consumes much than it needs and expresses his gratitude to Co2balance for considering his village for the project.