Every evening across Kenya millions of women both young and old cook for their precious families over open traditional three stone fires fueled by poorly burning wood, children coughing from the dense smoke and particulate matter that fills their homes. Black grime coats the undersides of their thatched roofs.

Black Carbon is a product of incomplete combustion of fossil fuel and is the most strongly light-absorbing component of particulate matter (PM). BC is emitted directly into the atmosphere in the form of fine particles (PM2.5). Major causes of global black carbon include the burning of agricultural residue, residential cooking and heating, transportation, and industrial fossil fuel use. Black carbon is not a gas but a particulate — a component of soot emitted by the incomplete combustion of fossil fuels and biomass. Emissions from black carbon recently emerged as a major contributor to global climate change. Control of black carbon, according to many scientists — could be the fastest method of slowing global warming in the near future.

Black Carbon mitigation strategies have been implemented for all of the mentioned sources, however the distribution of improved cook stoves is among the most cost effective means of mitigating global BC emissions. Replacing primitive cooking stoves with modern versions that emit far less soot could provide a much-needed stopgap.

Attempts have been made at improving cook stoves since the1940s. Improved cook stove development started in India in early 1950s, but scientific development increased in 1970s and 1980s. However not all households have freely accepted and appreciated the new energy efficient stoves that easily. It is evident that not all “bottom of the pyramid” products are the same. One wonders why are some products such as cell phones readily adopted by the poorest of the poor while others such as cook stoves which are so important still are not? But if black carbon is ever to be addressed on a large scale, acceptance of the new energy efficient cook stoves is crucial.
With the full understanding that soot should be a top priority in fighting global warming Carbon Zero has prioritized working with local women from rural communities to implement energy efficient cook stoves to slowly cut down the level of carbon emitted in the atmosphere. This is because women have a role to play in every segment of the clean cooking value chain, and their involvement can increase project effectiveness and help scale adoption of products and services, while also impacting their livelihoods. There is a huge pay off when project developers take the time and effort to integrate women and understand gender dynamics – it can increase their bottom line, while providing health, environmental, and social impacts. Carbon Zero recognizes the contributions that women can make to achieve the sector’s health, environment, women’s empowerment, and livelihood goals.
As a result the company is currently working with local women in Kisumu West to sell cook stoves to locals within the community at subsidized prices. This comes after the women were well trained in energy efficient cook stove manufacturing, facilitated to manufacture hundreds of stoves and now the stoves are being sold though at subsidized prices to the local communities. 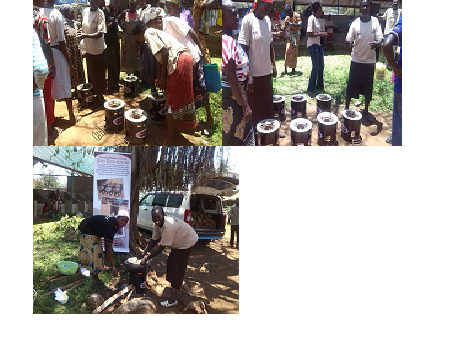 Carbon Zero has helped the women scale up stove distribution in other remote areas within Kisumu West through the women’s organized networks that have enabled reaching of vast new customer segments. The women have been facilitated to have access to hard-to-reach households, utilizing woman-to-woman marketing techniques and this is bearing fruits as the number of stoves being sold is steadily increasing day after day.